"Our County - Our Responsibility"!

The CAMECO-led pilot project “Our County- Our Responsibility!: Community media mobilising for accountability in Kenya”, funded by the Federal Ministry for Economic Cooperation and Development (BMZ) for one year, has shown positive results in increasing civic participation, awareness and transparency on how local government budgets are spent. In 2010, Kenya adopted a new constitution, and voted to decentralise government. Forty-seven counties were created, and county governments negotiated a working relationship with the national government in terms of power and revenue sharing. Decentralisation is to be based on three pillars: Participation of the population, transparency, and accountability. Every five years, each county submits a "County Integrated Development Plan"(CIDP), which defines the respective development areas, goals and budget lines. According to the Constitution, the development measures set out in these documents should also reflect the priorities of the citizens, which result from a participatory process in which citizens are involved, and their opinions and recommendations are taken into account.

However, the results of the pilot project confirm what had already been shown in supra-regional research: the concerns of the citizens in the eight selected target counties often contrast with the measures that have been decided upon. The majority of the population was not informed that so-called citizens' forums were taking place in which the plans were to be presented and discussed. The CIDPs were not accessible two weeks before, as prescribed. The time frame for the forums was extremely limited, and left little room for dialogue and participation. The technocratic use of language and the complexity of the budgetary procedures were largely incomprehensible to those present, so that authentic and critical involvement by citizens was hardly possible. The "open government - open data" approach propagated by the government is inadequately implemented. Accountability is largely neglected by county governments. Transparency is not established with regard to either the planned or the implemented development projects. Of the representatives of the population interviewed in the pilot project, 94% stated that nepotism and favouritism are rampant in their district administrations, and that embezzlement, corruption and misappropriation of funds are commonplace. Finally, the fact that district officials from six of the eight counties involved in the project were summoned by the Ethics and Anti-Corruption Commission (EACC) and the Director Public Prosecution (DPP) for corruption and misappropriation of funds is a clear indication of the lack of transparency and accountability of local governments.

In such a situation, the information and control function of local media plays a key role. They have the potential and opportunity to promote participation in debates and discuss the management of public affairs, as they have the most immediate and direct access to people, especially in rural communities.

In the pilot project, the Kenya Community Media Network (KCOMNET) and the social science research institute Jesuit Hakimani Centre (JHC) cooperated to enable 14 citizen radios in eight counties to understand the political process and the contents of the local development plans and their implementation. The main objective of the pilot phase was to motivate the population to participate actively in democratic decision-making processes and to demand good governance. Topics such as the mandate and role of public officials, processes of public participation, budget cycles, etc. were first conveyed to journalists, and then addressed in 42 radio productions and 24 theatre plays, uploaded on Sikika.net. In addition, JHC had previously interviewed the population about their previous participation level and their own main concerns, which were set out in a strategy paper for each of the eight counties.

After completion of the pilot phase, during which the community media were supported with county specific background material (such as fact sheets, posters and county brochures), tailor made media content development trainings and productions at county level, as well as the mobilisation of communities to attend public county forums, etc., the majority of the radio editors feel well informed about the CIDPs. The participation of citizens in public forums at county level was increased in average by about 50% through their reporting, and weaknesses in the information policy of the district governments were revealed.

However, it also became apparent that the journalists of the citizen radio stations are not sufficiently qualified to research development-related topics themselves, to prepare the "stories behind the data" in a journalistic manner, and to fact check the truth of the statements of their interview partners.

On the basis of priority needs defined by KCOMNET, CAMECO developed, in cooperation with the radio network and the new partner Code for Africa (CfA), a civic technology, open data and data journalism NGO, a follow up project, which is planned from October 2020 until the end of 2023. The new project “Our County- Our Responsibility: Telling Data Stories - Revealing Citizen’s Realities” includes comprehensive training schemes (e.g. research techniques, data journalism, solution-oriented reporting), and the design of an IT-based online tool (County Data Information System - CDIS), which will be continuously maintained, thus creating data transparency for the development schemes of county governments. Cooperation with aspiring young journalists is being systematically expanded in the follow up project, to improve the political education of young people, and to incorporate their concerns into the public debate. (asj/ps, August, 2020) 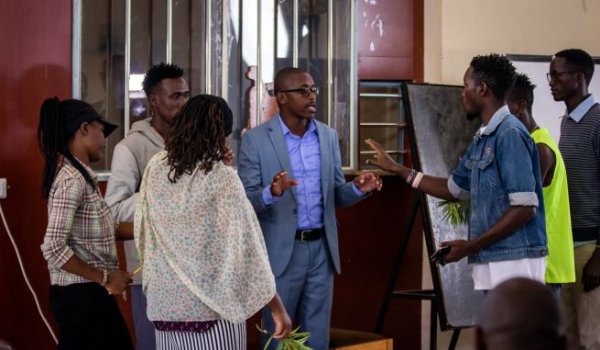