Does knowing you mean trusting you?

“Does knowing you mean trusting you?” was the provocative question of a panel, co-organised by CAMECO, Weltfilme and the Friedrich-Ebert-Stiftung, challenging the common assumption that local media, especially community media, enjoy the trust of their audiences as a natural consequence of their (geographic) proximity. The session was part of fome21, the annual symposium of the Forum Media and Development (fome), in 2021 entitled: “Believe it or not! Enquiries about TRUST in media (assistance)”, organised by Media in Cooperation and Transition (MiCT) in partnership with the Konrad Adenauer Stiftung (KAS). The session on local media focused on challenges and pitfalls and explored ways in which trust can be earned, sustained or increased in the relationship between media practitioners and their local audiences. Prof. Vinod Pavarala, UNESCO Chair on Community Media at the University of Hyderabad, explored the situation with respect to community radios in South and South East Asia, to which Vivienne Marara and Tom Mboya, Coordinators of Community Radio Networks in Zimbabwe (ZACRAS) and Kenya (KCOMNET), responded. In the second segment, Ghanaian filmmakers, lecturers, and activists, Aseye Tamakloe and Kwabena Eddie Mankata, shared their experiences of the impact of direct audience interaction at mobile cinema screenings and local film festivals, and the doubts or trust they encounter when presenting fictional or documentary films. The recording is now available.

In his keynote opening, Vinod Pavarala stressed the importance of Community Media supporting democratic development “headed from the perspective of the citizens”. He reminded the donor community, that not only the “tangible” outcomes, requested in the logframes of applications, should be taken into consideration but also the intangible ones, such as furthering pride in one’s own identity, enhanced capacities for self-expression, and gender empowerment. “These positive effects, however, need a real proximity to the local community”, stated Pavarala, including ”emphasis on local issues, usage of the local language, community ownership and the breakdown of the producer-consumer dichotomy”. As major challenges for community media, he identified a restrictive regulatory environment, weak financial sustainability, and state patronage considering community media as “last mile delivery platforms”. To “heal what is fractured in a community environment”, he called for a “return to non-negotiables”: community participation, ownership and engagement as well as community content production, using local languages, recognising local identities and covering local issues.

Both representatives of community media networks expressed their approval of these basic principles. Vivienne Marara described how the notion of NGO-supported community media have been branded by Zimbabwean politicians as a “regime change tool”, labelling them as “appendices of foreign governments”. Licences were provided to state affiliates, and in some cases the weak financial management opens the door to provide access for all kinds of interest groups. ZACRAS is therefore committed to reminding its member radios that communities have to be at the forefront of the dissemination and production of content, because only “inclusion provides sufficient trust”. She argued against any form of one-sided partisanship: “Content might be political by nature but should always be related to local issues and give voice to all kinds of views”.

In the equally highly politicised Kenyan society, Tom Mboya identified as main challenges to community media, a lack of community ownership, externally imposed agendas, and government paid salaries, and he referenced: radios’ difficulties to manage their bills allow political parties or single candidates to buy air time. KCOMNET, representing 25 community radios, plus 18 affiliated Catholic stations, 20 theatre groups and 10 local newsletters, sees it as the main task to support members’ capacity building to improve sustainability, because only “political independence of the media leads to trust in the media”.

In a second part, two filmmakers and lecturers from Ghana who address current social issues in their productions investigated the role of trust in local reception situations.

Aseye Tamakloe referred to her experiences at film festivals, finding that trust depends on the kind of audience, the culture and the diversity of the audience at a film screening. She exemplified that trust depends on how people feel about what they see, engage and have conversations they would not otherwise have and how the connection to one’s own realities is made. “Identification with main characters builds trust, whereas misrepresentation questions trust.” Kwabena Eddi Makanta demonstrated how he and his team involve the local communities from the creation of the script up to the making of the films and their distribution. He iscertain, “if we engage communities, if people hear their own dialect, see their own community, the people will sit down and watch and really engage”.

Recordings of the following sessions are available on the fome Website:

Contextualising TRUST: what are we actually talking about? Keynotes by Nicole Stremlau: Research Professor in the Humanities at the University of Johannesburg and Head of the Programme in Comparative Media Law and Policy at the University of Oxford and Benjamin Toff: Lead researcher for the Trust in News Project at the Reuters Institute for the Study of Journalism; Assistant Professor at the Hubbard School of Journalism & Mass Communication, University of Minnesota. Issues with trust in fragile contexts: what impact of armed violence and transition on media perception? (hosted by Forschungszentrum „Entwicklungskommunikation – Communication for Social Change“, Institut für Kommunikations- und Medienwissenschaft der Universität Leipzig – EC4SC –, and Media in Cooperation and Transition – MiCT) Issues with trust in (semi-)authoritarian contexts (hosted by the Friedrich Naumann Stiftung für die Freiheit and n-ost) Lessons learned from crisis communication: How can trust in media be improved? hosted by DW Akademie and Thomson Foundation Does data journalism help the local press out of the crisis? (hosted by Institut für Demokratie, Medien und Kulturaustausch –IDEM)

A universal approach to trust? How media worldwide counter mistrust with transparency – RSF’s Journalism Trust Initiative (hosted by Reporters Without Borders) Result Chain Oriented Impact Evaluation – A new method to know in detail how media recipients process information in their social contexts (hosted by the Institute of Applied Media Studies (IAM) Zurich University of Applied Sciences (ZHAW)) What role for trust in international media support collaboration? (hosted by the Interlink Academy, MEDAS21, Thomson Foundation) China as a rising competitor in media development – from the perspective of local journalists (hosted by Konrad-Adenauer-Foundation – KAS – and Reporters Without Borders – RSF – Germany). 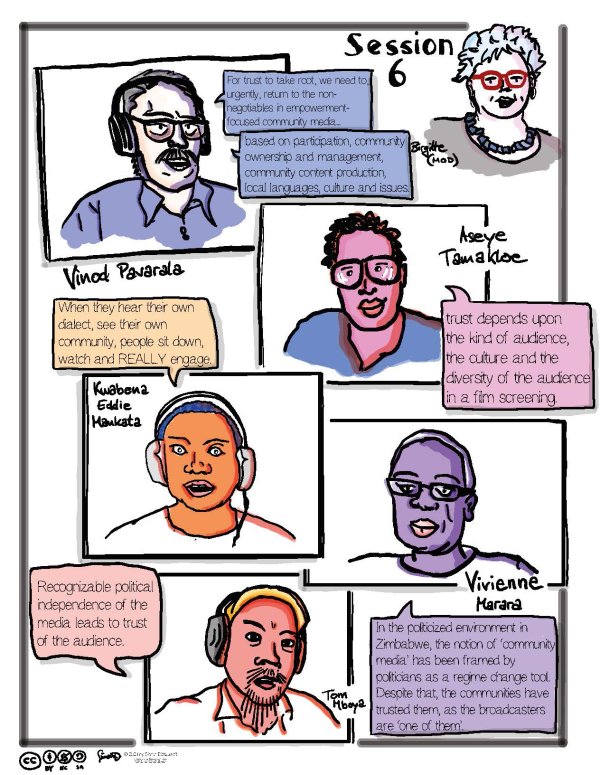